Everything present in this world is short lived. Whether it is human or any other creature, none can survive on the surface of the earth forever. There are clear signs in this for everyone to realize that there is Someone Who is controlling all that is happening in the entire universe, and no doubt that Supreme Being is of Allah SWT. It is also a common sense that the one who creates something first time, it can surely make it again, as in the case of human inventions and innovation. That is why the Almighty Lord says in the Holy Quran:

“Allah – there is no deity except Him. He will surely assemble you for [account on] the Day of Resurrection, about which there is no doubt. And who is more truthful than Allah in statement.” [Quran, 4: 87]

The above mentioned Ayah describes the state of each individual that ever lived on this planet to be raised again and be rewarded for whatever it has done in its previous life. The time every person will be reborn is regarded as the Judgment Day as it is the occasion when it will be evaluated for its beliefs and actions in the worldly life by the Best Judge of all, i.e. Al-Hakam (God).

According to various Quranic verses and Ahadiths of Hazrat Muhammad ﷺ, everybody will be asked about fulfillment of all the compulsory religious actions like Belief in Allah and His Messenger ﷺ, and the accomplishment of Salah (Daily Prayers), Soum (Fasting), Zakah (Charity) and Hajj (Pilgrimage). A person will also be asked about fulfilling rights of fellow humans.

Apart from these, there are five basic queries that will be made to every being as per the following Saying of Rasulullah ﷺ:

“The son of Adam will not pass away from Allah until he is asked about five things: how he lived his life, and how he utilized his youth, with what means did he earn his wealth, how did he spend his wealth, and what did he do with his knowledge.” (Tirmidhi)

This Hadith portrays the situation of every human on Day of Final Verdict. Even if it has passed in answering the rest of inquiries, be it religious or social, it will not be able to enter Jannah (Paradise) until or unless it succeeds in giving satisfying replies to these 5 basic questions: 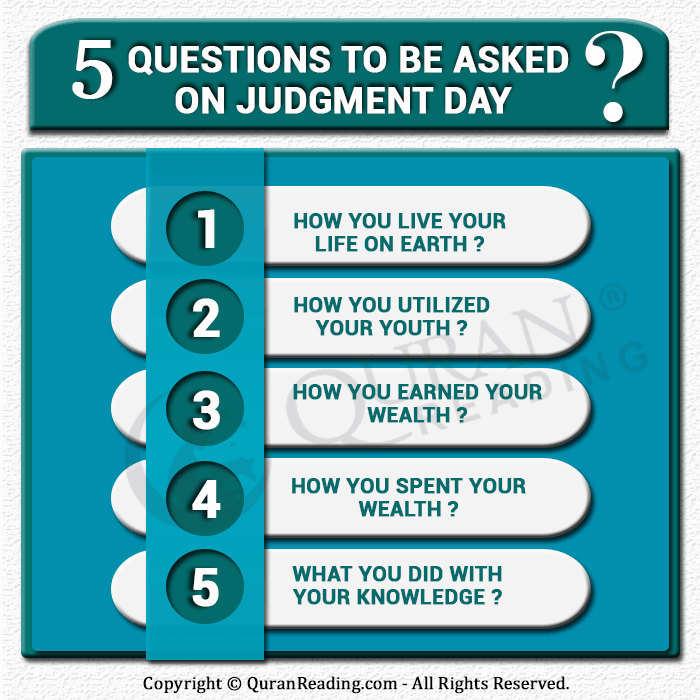 Now let us discuss these 5 fundamental and decisive factors for one`s success or failure in the hereafter in order to understand them better:

The very first question that the Apostle ﷺ of God has talked about in His Hadith is the asking of one`s central idea of living on earth. It includes the main purpose of one`s life: what main driving force behind its efforts. The Islamic point of view regarding one`s purpose of life is plain and simple, i.e. to spend in veneration of Allah SWT, Who says in Furqan e Hameed:

It means that the necessary motive behind creation of humans is nothing but to realize the Ultimate Power of the Almighty Lord and Glorify and Pray to Him alone. This faith is commonly known as “Tawheed” which means that one should have concrete belief in the Oneness of God and also fulfill its true spirit through actions. For example, if someone is offering Salah, it is imperative that whether that person is actually performing it for sake of attaining the Pleasure of its Rabb or just as a means of show off in front of fellow Muslims.

The Sunnah (Way of Life) of Hazrat Muhammad ﷺ should also be an essential part of one`s existence and one must also not ignore its significance as Rasulullah ﷺ is the reason mankind has received enlightenment till the end of the world.

“And obey Allah and obey the Messenger and beware. And, if you turn away – then know that upon Our Messenger is only [the responsibility for] clear notification.” [Quran, 5: 92]

Therefore, everyone will be asked about whether they based their lives around the notion of pleasing and obeying God and His Apostle ﷺ or in seeking delight of the world. The Almighty Lord says in His Sacred Scripture:

Then you will surely be asked that Day about pleasure. [Quran, 102: 8]

It means that the time spend in attaining luxuries of the worldly life will hold one accountable on the Occasion of Finding.

Although the entire existence of a human is a great test, but its youth has been even greatly emphasized upon. As, it is the age when a person acquires much understanding of things, conscience and also the time of being under the satanic influence much more than the rest of the life, therefore, it will be asked about in particular in what sort of activities one has spent its maturity time in. Whoever spends much of its time in worshipping Allah SWT and curbs its forbidden desires and wishes in its juvenile is regarded as the best among the youth in Islam. One should also repent on its sins as much as it can while being in young age, for it is dearer to the Most Merciful Who readily Pardons His youthful servants. Rasulullah ﷺ said:

The above stated Hadith is a clear indication of how important the time of youth is in terms of one`s accountability. Thus, one should make full use of this time as person is energetic in this age and can make its God happy with worship before getting old.

The skills and abilities that Allah SWT gives to everyone in this world are meant to be forms of great assessment. Believing in the fact that the conscience and capability are God-Gifted, one will be held accountable whether it utilized them in earning just and rightful wealth or the otherwise.

“And, We will surely test you with something of fear and hunger and a loss of wealth and lives and fruits, but give good tidings to the patient.” [Quran, 2: 155]

The above mentioned Ayah tells that lack of material goods is just a source of testing a person whether it remains patient in time of austerity or not. In brief, the Almighty Lord will ask His servants about their means of collection of assets in the hereafter, therefore, one must be cautious in its ways of gathering money and income.

As per the Hadith under discussion, on the Day of Judgment, one will not only be asked about channels of earnings but also concerning where and how it splurged its wealth. Allah SWT says in the Holy Quran:

Your wealth and your children are but a trial, and Allah has with Him a great reward. So fear Allah as much as you are able and listen and obey and spend [in the way of Allah]; it is better for your selves. And whoever is protected from the stinginess of his soul – it is those who will be the successful. [Quran, 64: 15-16]

Thus, prosperity is considered to be a root of testing by the Almighty Lord, and He has directed one to spend in His way, which could be spending wealth for any good cause like helping out the orphans, widows, poor students etc. The fact of the matter is that one should get ready for being accountable for its expenditures of riches in the hereafter.

Allah SWT has granted every human being with conscience to differ between right and wrong. The Holy Quran is also a great form of getting enlightenment about all the matters concerning one`s life. The Creator of the universe says in His Sacred Manuscript:

“And, We gave them clear proofs of the matter [of religion]. And they did not differ except after knowledge had come to them – out of jealous animosity between themselves. Indeed, your Lord will judge between them on the Day of Resurrection concerning that over which they used to differ.” [Quran, 45: 17]

Therefore, on the Day of Ruling, whoever got knowledge about the Almighty`s commandments will definitely be held answerable for whether it utilized that insight in its rightful manner or the or else.

In short, the Holy Prophet ﷺ has provided all His followers with 5 crucial courses of actions which will result in one`s success or failure on the Day of Judgment.