It is in human nature that when a person likes someone, it tries its best to say no word of offence in order to please that individual, like parents let go of most of the mistakes of their children because they love them. Same is the case of a true Muslim, who knows that the purpose of its presence in this world is solely to live according to the directions of Allah SWT, being closer to Him and gain His Affection. Abu Hurrerah (R.A) narrates the Holy Prophet (PBUH) saying as:

“Verily Allah Ta’ala has said: ‘Whosoever shows enmity to a wali (friend) of Mine, then I have declared war against him. And My servant does not draw near to Me with anything more loved to Me than the religious duties I have obligated upon him. And My servant continues to draw near to me with nafil (supererogatory) deeds until I Love him. When I Love him, I am his hearing with which he hears, and his sight with which he sees, and his hand with which he strikes, and his foot with which he walks. Were he to ask [something] of Me, I would surely give it to him; and were he to seek refuge with Me, I would surely grant him refuge.” (Sahih Bukhari)

The above mentioned Hadith sheds light on advancing towards the Almighty Lord, and seeking His liking. First, it has been emphasized to accompany “Wali” (Friends of Allah), those who are already in close proximity with the Gracious God, and refrain from hostility to them in order to avoid the Wrath of the Most Powerful. It means that one should first escort and act upon the advices of true disciples of the religion of Islam, for they act a guiding path towards the attainment of Allah`s Qurb (amity) and keenness. One can also take help from obligatory and non obligatory actions in this regard. And there are great rewards from the Most Beneficent for such person in the form of Allah`s assistance in completion of one`s matters. 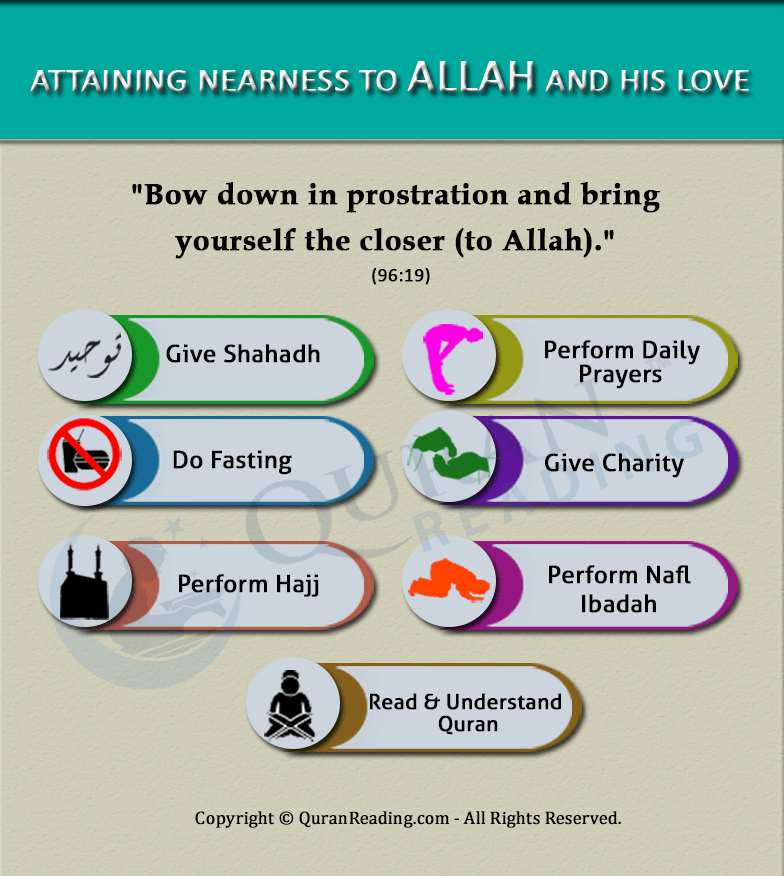 Following are some of the Fard (compulsory) and Nafl (non compulsory) ways to achieve the Almighty`s Friendship and Love:

Muslims are required to perform certain sacred duties. These responsibilities include five major pillars of Islam, i.e. tawheed, Salah (prayers), fasting, zakah (charity) and Hajj (Pilgrimage), without which one cannot attain the much needed companionship of the Almighty.

The foremost deciding factor to acceptance of Islam is completion of one`s faith by first considering Allah SWT as the Sole Creator of everything that is residing in this world and the entire universe, and also believing in the fact that Hazrat Muhammad (PBUH) is the Last Prophet of God, the Exalted. It also demands that one should avoid from committing Shirk (taking someone else as partner of God).

This Ayah from Surah Fatiha (Chapter 1), which is a form of supplication for gaining the righteous path, shows that one can only attain the Almighty`s guidance in matters through execution of Tawheed. We Muslims recite this verse each time we offer the obligatory prayers, which are also great means of getting closer to the Creator of the world of the worlds.

Salah is the second most important religious action that we are ordered to perform five times a day. It`s a means of prostrating in front of Allah SWT, and asking for His Mercy and Blessings. During these prayers, a Muslim is in a state of standing right in front of God, and especially in the state of Sajdah (prostration), one is closest to the Almighty that it ever can try to.

In the above stated Quranic verse, the Almighty Lord is urging us to ask only from Him, so that we could be drawn near to Him.

This act is solely meant for sake of Allah SWT and Muslims are obligated to carry out 30 consecutive Saum (fasting) in the holy month of Ramadan. During fasting, Muslims avoid eating, drinking, forbidden talking and other wicked activities, and in the end, they are able to receive Compassion and Bounties of the Gracious God. The Messenger (PBUH) of Allah once declared:

“Allah said: ‘Every deed of the son of Adam is for him except fasting; it is for Me and I shall reward for it…” (Bukhari and Muslim)

This Hadith e Qudsi describes the great reward from Allah Almighty to His servants for this action. As this deed keeps one away from all sinful activities so it automatically leads towards the attainment of closeness to God.

The religious duty to take care of the poor people around oneself by sharing one`s surplus resources among them up to a certain limit. It ensures the stabilization of the society through mutual welfare.

“Your ally is none but Allah and [therefore] His Messenger and those who have believed – those who establish prayer and give zakah, and they bow [in worship].” [Quran, 5: 55]

It means that donating among the needy is one of the chief ways to gain the company of the Almighty Lord.

This sacred action which involves visiting and completing the Sunnah of Hazrat Ibrahim (A.S) to show one`s gratitude towards Allah SWT.

These Ayats tell us about the implication of this deed as it is done for sake of the Almighty, and His provision is granted for whoever performs it with true heart. The faithfulness shown to the Most Merciful leads towards closeness to Him, as He knows the exact intentions of deeds and the more we move towards Him, even more He moves towards us.

The saying of the Holy Prophet (PBUH) under dialogue takes religious duties as the primary source of attaining closeness to the Almighty, and also  rates Nafl (non obligatory) actions very high for gaining the Love of Allah SWT. Nafl means “anything that comes as a bonus”. As supererogatory deeds are up to one`s own will to either perform or not, and they demand extra effort from an individual, so by executing them, one tends to get prominent among other Muslims, and gets additional blessings from God. The Messenger (PBUH) of Allah used to carry out such deeds on a regular basis, like praying Tahajjud Salah and Istikhara Supplication (Sunnah of Hazrat Muhammad PBUH) in later part of night which are deemed as the most useful ways of being near to the Most Gracious. It is narrated by Umme Habibah (R.A) that the Prophet (PBUH) has said:

“Any Muslim slave of Allah who prays for the sake of Allah 12 rakats every day other than the obligatory (prayers) Allah will build for him a house in jannah.” (Muslim)

Such is the great significance of these prayers that one gets eligible to enter the Jannah by offering them daily along with compulsory Namaz.

The Sacred Book of Quran acts as a reminder for all of us about our purpose of existence on earth, direction for success in this world and hereafter through fulfillment of our religious and moral duties, solutions to many of our social and individual problems etc. So, by reading the verses of Quran, one gets enlightened regarding many issues that are means of accomplishment in the world and hereafter.

This Quranic verse elaborates the worth of understanding the Holy Book in a sense that it is a complete source of guidance. When one comprehends the basic theme of Islamic conviction, it ultimately results in closeness to the Almighty Lord, pleasing Him and shirking from the worldly pleasures.

So, to conclude, we can say that by fulfilling the requirements that are discussed above, we can attain the Companionship of Allah SWT, which results in execution of all our actions effectively, as the Almighty takes control of them and Helps us in their execution. And undoubtedly, His Company is Safest of them all, after which we no longer require to seek anyone else` assistance and protection. May Allah, the Exalted give us willpower and craving to seek His Comradeship through righteous deeds! Aameen!