Human history on earth shows that the demise of every civilization was due to negligence regarding the commandments of Allah SWT which His Prophets had informed them about. Whether it is about rejecting the prescribed faith by them in One God by the Apostles of the Almighty Lord or deviating from His teachings concerning social life, the Rule of the Exalted One always prevailed in the end one way or another. The feelings of hatred among one another and love for worldly desires and wishes had always been one of the main problems of every nation. Islam also instructs about great anguish of the Most Powerful in this regard in Surah Al-Humazah:

“Woe to every scorner and mocker. Who collects wealth and [continuously] counts it. He thinks that his wealth will make him immortal. No! He will surely be thrown into the Crusher. And what can make you know what the Crusher is? It is the fire of Allah, [eternally] fueled, which mounts directed at the hearts. Indeed, Hellfire will be closed down upon them, in extended columns.” [Quran, 104: 1-9]

In the above mentioned Ayats of Surah Al-Humazah, which is a Makki Chapter, the Creator of the universe shows His great Sadness with those who make fun of others and utter bad words against them on their backs. He has also criticized the ones who keep tremendous amount of fondness with collecting more and more money and keep on counting it with pride. Allah SWT says that none`s wealth will give them any favor in the hereafter and such people will inhabit the never-ending torment of hell. The fire will not be like that of a normal one rather it will reach the hearts of these individuals which means that they will have to suffer this great agony because of their evil nature and deeds. The hellfire will surround them from all corners and they will find no way to escape from it. 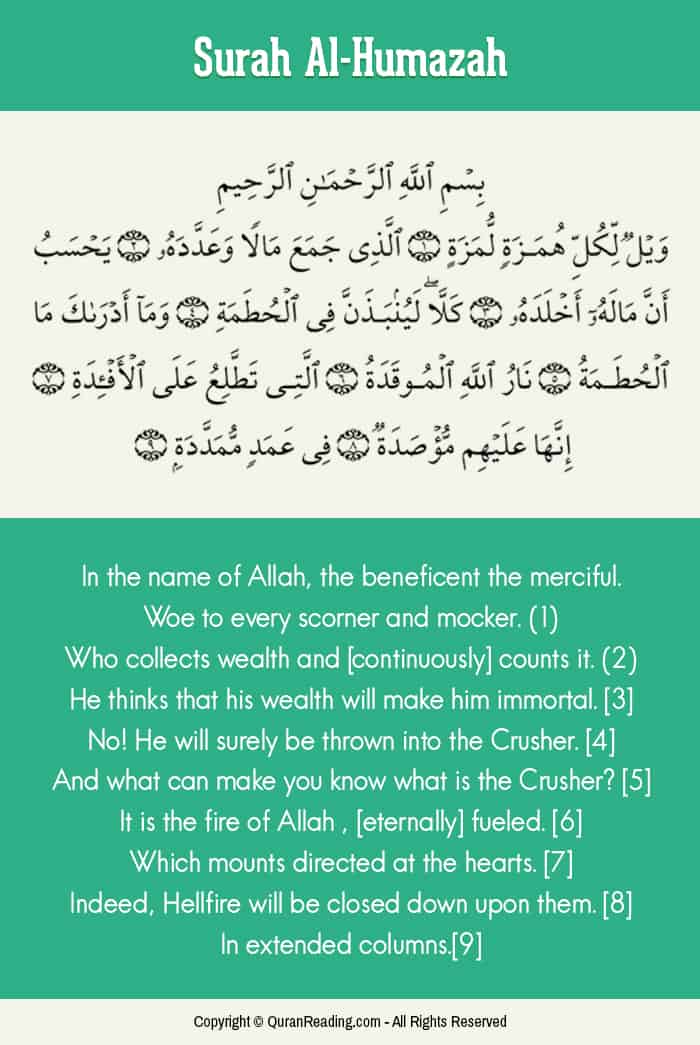 Now let us discuss the major issues discussed in this highly blessed Surah of the Holy Quran in detail:

Great Suffering For the Slanderer

This Sacred Chapter of Furqan e Hameed takes its name from the word “Humazat” that has been used in its very first verse. The two words “Humazat il- Lumazah” are taken together here, as both “Humz and Lumz” share the same meaning of “slandering” in the Arabic language. The initial Ayah gives indication about great Grief of Allah SWT that He has shown for a person who usually feels pride and satisfaction by insulting and mocking others to defame their social status. The Almighty Lord says in His Consecrated Manuscript:

“O you, who have believed, let not a people ridicule [another] people; perhaps they may be better than them; nor let women ridicule [other] women; perhaps they may be better than them. And do not insult one another and do not call each other by [offensive] nicknames. Wretched is the name of disobedience after [one’s] faith. And whoever does not repent – then it is those who are the wrongdoers.” [Quran, 49: 11]

These Quranic verses indicate the Exalted One`s instruction to all the believers to avoid making fun of one another as it is well possible that the one who is being mocked may be better than the offender. This is basic guideline by Allah SWT to adopt good manners in one`s social life by keep away from a discourteous behavior. In the end, He has promised severe punishment for those who disobey Him in this matter.

Consequences Of Collecting Wealth With Pride

The Religion of Peace greatly prohibits from indulging in materialistic wishes and desires. In second and third Ayats of Surah Al-Humazah, Allah SWT takes one`s attention towards His immense Unhappiness with those who are busy in gathering wealth, count it again and again with arrogance and believing that it would be of any use to them eventually. They are the ones who do not spend on orphans and other needy people from their material goods. The Almighty Lord has repeatedly shown His great Grief with such people in the Holy Quran.

“Do you construct on every elevation a sign, amusing yourselves? And take for yourselves palaces and fortresses that you might abide eternally?” [Quran, 26: 128-129]

In these verses, the Creator of the universe mentions state of a pompous person who thinks of its worldly rise in status in terms of assets and capital as a means of everlasting amusement in this world. But that is not the case, as the life on earth is temporary and nothing except deeds of an individual will be of any use in the hereafter.

In the very next verse of Surah Al-Humazah, Allah SWT replies to His previously asked question by negating the idea of one`s pile of wealth on which a person used to feel proud would be of any use. Rather, that individual along with its riches will be thrown into a crusher, i.e. hellfire, which will break them into small pieces.

Description Of The Torment Of Hell

In the remaining Ayats of Surah Al-Humazah, Allah SWT describes the nature of the hellfire that will take every bigheaded prosperous person ever lived on the surface of the earth. It will be of such strength and magnitude that it will reach their hearts that will remind them about all their wealth in the world. The Almighty Lord has frequently talked about great pain and anguish of the hellfire for such people in the Holy Quran:

“[Allah will say], “Seize him and shackle him. Then into Hellfire drive him. Then into a chain whose length is seventy cubits insert him. Indeed, he did not used to believe in Allah, the Most Great. Nor did he encourage the feeding of the poor.” [Quran, 69: 30-34]

In the above mentioned Quranic verses, the rich who did not use their possessions for helping others and passed up on conducting Zakah, will forever be chained in the hereafter in hell where they will find no means of getting away.

In short, Surah Al-Humazah is short yet highly effective Chapter of the Holy Quran that instructs us that mocking others and being proud on making money without aiding the needy are such actions that are highly disliked by Allah SWT.