Muslims are bound to learn Salaah and offer it five times a day, namely Fajr, Dhuhur, Asr, Maghrib and Isha. There is a great implication in praying daily, as it improves the link between a man and the Creator of the universe. It also serves as a means of forgiveness of sins and earning of lots of blessings from Allah SWT. Although every Namaz is equally important, but Fajr and Isha are considered as a measure of differentiating between Momineen (true believers) and Munafiqeen (pretenders of faith). Abu Hurrerah (R.A) narrates the Holy Prophet (PBUH) saying as:

“The most difficult salah for the munafiqeen is isha and fajr. Had they known the rewards for them they would have attended them even if they had to crawl on their knees.”(Bukhari)

As, it generally gets tougher to pray at the times of night and early morning, so it vastly increases the reward for executing Isha and Fajr, and the incentive itself could not be any better than being included among the ranks of the staunch disciples of Islam. Moreover, since it is our common belief that prayers always have a soothing effect on its practitioner, so does Isha, in the form of a pleasant sleep at night. 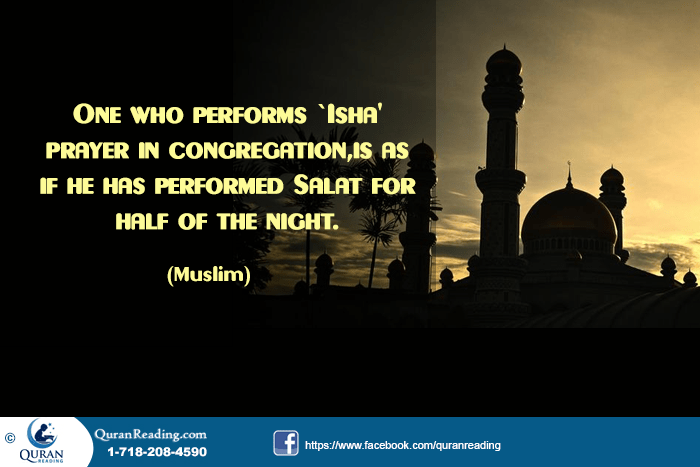 Now let us discuss some of the essential constituents of this prayer:

Every prayer has its specific time to offer, and mostly have strict schedule like Fajr, Dhuhur, Asr, and Maghrib. However, the interval of Isha is considerably far stretch than the rest, which is normally said to be starting from the end of Maghrib and concluding before Fajr. But specifically speaking, its desirable session lasts right before midnight according to the following Hadith described by Abdullah b. ‘Amr reported (R.A):

In short, time period of every Namaz lasts as late as the beginning of next Salah, with the exception of the one in the morning, which only remains up to time of daybreak. As per above stated saying of Hazrat Muhammad (PBUH), Isha prayer has ideal timing till midnight, but there is some relaxation for those who fall asleep early and can accomplish this very Salah till the start of Fajr, but that is considered as Makhrooh (uninvited), yet not forbidden. Abu Qatadah (R.A) reported that the Messenger (PBUH) of Allah said:

“There is no negligence in sleeping, but the negligence lies in not praying a prayer until the time of the next prayer has come. And whosoever does so should pray as soon as he becomes aware of the negligence.” (Muslim)

That is why many Muslim scholars have spoken in favor of offering the night prayer till Fajr however perfect time for Isha remains up to one third of a night as per following Hadith narrated by Abu Hurrerah (R.A):

“If it were not to be a hardship on the Ummah, I would have ordered them to delay the Esha Salah until a third or half of the night had passed.” (Tirmidhi)

Since, one normally feels tired at night time, so it is advisable to complete this obligation before going to slumber, as it is difficult to wake up afterwards, and take care of prayer timings, so that one may not miss the prayers.

Although it seems too common to mention having maintained proper ablution for Namaz, but unfortunately some of us do not care much about the delicacy of this matter, and opt for carrying out consecutive prayers through a single wudu. This act might result in cancellation of Salah if one was not able to uphold a state of purity for any reason in between two prayers, as it is necessary to remain clean both physically and spiritually before every Namaz.

The quantity of Rakats included in Isha prayer in the ascending order is as follows:

Formerly being part of Tahujjud (voluntary) prayers which are offered at night time after sleep, but due to relaxation given by the Holy Prophet (PBUH) to those who could wake up at night, especially in Ramadan, to offer it along with Isha, it has been taken as a part of this Salah afterwards, and that is why it is Wajib (necessary). Hazrat A`isha (R.A) related the Holy Prophet (PBUH) speaking as:

“Allah’s Apostle offered Witr prayer at different nights at various hours extending (from the ‘Isha’ prayer) up to the last hour of the night.”  (Bukhari)

As, the Messenger (PBUH) of Allah has greatly emphasized on the significance of Tahajjud Salah, and regarded it as the way of getting closest to the Gracious Lord and gaining His bounties through purification of one`s soul, so it also enhances the status of Witr Rakats.

While the whole Namaz is a way of prostrating in front of the Most Merciful, and consists of Surah Fateha which is an appeal for adopting and maintaining right path. But Witr Rakats in Isha prayer contains an additional request in shape of Dua e Qunoot:

“O Allah! We beg help from You alone; ask forgiveness from You alone, and turn towards You and praise You for all the good things and are grateful to You and are not ungrateful to You and we part and break off with all those who are disobedient to you. O Allah! You alone do we worship and pray exclusively to You and bow before You alone and we hasten eagerly towards You and we fear Your severe punishment and hope for Your Mercy as your severe punishment is surely to be meted out to the unbelievers.”

So, it is a complete package of supplicating in front of the Almighty Lord, which contains almost every plea in itself.

The Holy Quran is full of verses, which are entirely on the basis of realization of Greatness of the Almighty and praying to Him. Some of the Surahs (chapters) are even class as beneficial to be recited at specific timings due to their own significance. Surah Al-Mulk also consists of such lines which describe testifying about the Eventual force of Allah SWT and His punishment for disbelievers.

“There is a soorah in the Qur’aan, with thirty verses, which will intercede for its companion [the one who recites it] until he is forgiven: “Tabaarak allaadhi bi yadihi’l-mulk (Blessed be He in Whose Hand is the dominion)” [al-Mulk, soorah 67]. Al-Tirmidhi said: This is a Hasan Hadeeth.”

Since, one is unconscious while in state of slumber which near to death, so it’s advisable to recite Quranic verses like the ones in Surah Al-Mulk, which could help in having a sound sleep and get up healthy. Even if one dies in its sleep, it would be advantageous for it to die in a state of Eeman (faith).

Every Namaz has its own implication, like Fajr helps us to start a day in the most rightful manner and successful spending of whole day. And performance of the most deeds in Islam also results in greatest amount of benefits and rewards. Same way, Isha Salah is hard to execute so it also follows with vast rewards from the Almighty.

Such is the high status of this prayer that one gets the incentives equal to spending half a night in adoration of Allah SWT. It means taking out only 15 to 20 minutes for a single obligatory Namaz can be as useful as venerating God for hours.

So, to conclude, we can infer that Salah of Isha, due to its tough time frame, differentiates one as true devotee of Allah`s commands from those who only act as believers. It consists of Witr prayer which is actually to be offered at some part of night after sleep. It is also a good source of supplication in front of the Almighty God in the form of Dua e Qunoot. Last but not the least, it follows with huge quantity of benefits and rewards from the Creator of the universe. May Allah SWT give us the will and desire to offer all prayers, especially those which are tough to perform like Isha. Aameen!