Besides fasting and the Taraweeh prayer, the one other thing Ramadan is most known about is the Layla tul Qadr. It is the blessed night in the last ten days of Ramadan and every good deed and act of worship committed during this night gets rewarded with an exponential increase, hence, every Muslim tries to catch this night and do acts of righteousness in this night. 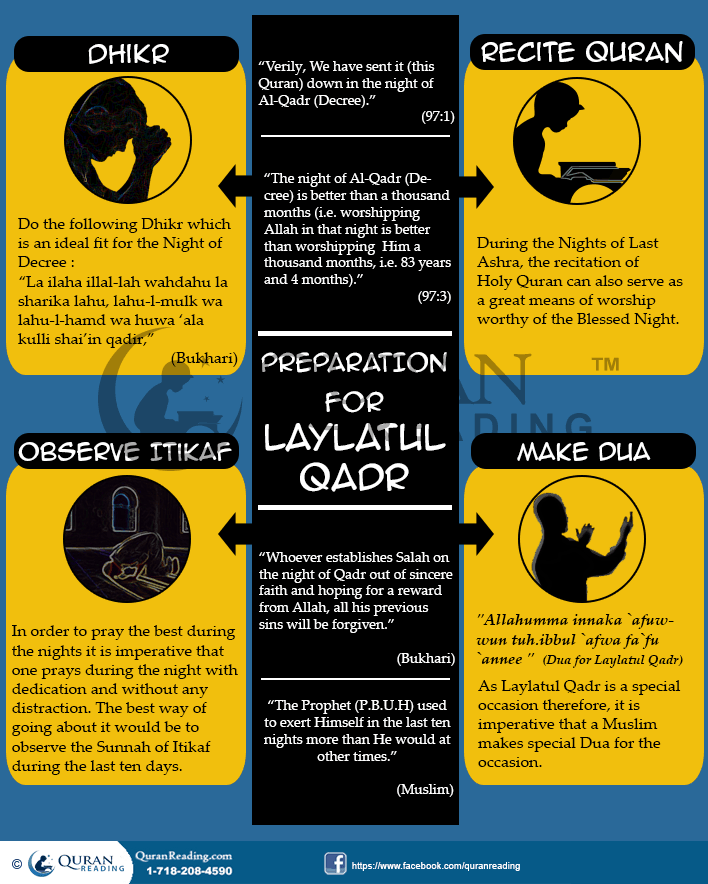 Muslims who are born Muslim and live in an Islamic culture and surrounding have a knowledge about what Laylatul Qadr is and how they ought to observe it, however, those who convert to Islam or are born in a non-Muslim culture, for them it is imperative that they understand the importance of this night and get accustomed with the right ways of observing this night in the best manner. The lines below give some tips to Muslims about the virtues of the Blessed Night and the preparations they should make to observe it in a better way.

Laylatul Qadr is one of the most blessed nights of the Islamic calendar and perhaps there is no other night that stands equal to it in sacredness and Holiness in Islam. This night usually resides in the last ten days of Ramadan and within those days it is in the odd nights of the Ashra. The lines below give some major virtues of the Night in the light of different Ayaah and hadith.

From this ayah of Quran it is more than clear that perhaps the biggest virtue associated with Laylatul Qadr is that in this night Allah Almighty bestowed Quran upon humanity, which is perhaps the biggest gift that Allah has sent upon humanity. Therefore, if a Muslim is to celebrate the Night for any reason, the biggest one can be perhaps the fact that Allah has sent down His biggest gift upon Prophet Muhammad (PBUH) on this night, hence it ought to be celebrated for this very gift. There can be many ways you can celebrate it, however, the ultimate option would be to start learning to read and understand the Holy Quran from this very blessed night. For that, you can Join QuranReading.com for online Quran Classes and begin with comprehending and reading the Quran with perfect Tajweed and meanings.

At another place in Quran, Allah Almighty says:

Tin this ayah of Quran, Allah Almighty shows the kind of stature and sanctity the Laylatul Qadr enjoys over the rest of the nights of the year. Moreover, the ayah also tells that the reward or the effectiveness of praying in this night is definitely better than prayers in a thousand months. Ergo, every Muslim must try offering as much prayer in this night as possible in order to receive uncountable and extensive reward.

Prophet Muhammad (PBUH) also spoke about this Night in one of His hadiths in the following way:

“Whoever establishes Salah on the night of Qadr out of sincere faith and hoping for a reward from Allah, all his previous sins will be forgiven.” (Bukhari)

This hadith again emphasizes on the great virtues of Laylatul Qadr. This hadith tells that this Night is the best option for a person to seek forgivness for the previous sins. All a Muslim has to do is be sincere at heart and seek forgiveness from Allah, which He will definitely grant on this night. Therefore, Laylatul Qadr can best be utilized as a means of seeking forgiveness.

Preparing For The Night:

The aforementioned virtues make it clear that Laylatul Qadr is the most blessed night and it can be found in the odd nights of the last ten days of Ramadan. Due to its sanctity and sublimity, it is imperative that a Muslim makes special preparations for this night and makes sure that this night is observed in the best possible manner. The lines below give some tips for preparing for this Night.

Take Vacation – Due to extensive prayer during the night, it is quite natural that the day afterwards would have a disturbed routine. Most of the Muslims do not pray long during the odd nights of the last ten days of Ramadan as they have to go to work or do any other chore in the morning. For such people it is recommended that they take vacations from their work for the days after the odd nights. Although for some it might be too much to ask for, however, if you sincerely want forgiveness and worship Allah in the best possible manner, then you must try taking a few days off to observe the night in the best possible manner.

Observe Itikaf – In order to pray the best during the nights it is imperative that one prays during the night with dedication and without any distraction. The best way of going about it would be to observe the Sunnah of Itikaf during the last ten days. When you are in Itikaf, it means that you have left all the distractions of the worldly life and for ten days, your only focus is prayer and recitation of Quran throughout the days and nights. Thus, when you are in such a state of mind, you pray the best without any worry or distraction.

Recite And Reflect On Quran – During the Nights of Last Ashra, the recitation of Holy Quran can also serve as a great means of worship worthy of the Blessed Night. In addition to reciting Quran and receiving reward against every word of it, one also needs to reflect on the words of Quran as well because they can open the new horizons of meanings for a Muslim. Therefore, in the Nights of Last Ashra try reading as much Quran as possible and whenever you get the chance also try pondering over its meanings in order to grasp the true purpose and gist of the reason why the particular verses were revealed and what message and preaching they entail.

As Laylatul Qadr is a special occasion therefore, it is imperative that a Muslim make special Dua for the occasion besides the daily Ramadan duas. Pertaining to the special Dua which a Muslim is to make during the Laylatul Qadr, Aaishah (RA) reported that  she asked Allah’s Messenger (PBUH):

“O Messenger of Allah! (sallAllahu `alayhi wa sallam),  If I knew which night is Laylat ul-Qadr, what should I say during it?”  Noble  Prophet (SallAllaahu Alayhi Wa sallam) advised her to recite:

In a nutshell, it is imperative that a Muslim strives for finding the Laylatul Qadr during the last ten days of Ramadan and in all the odd nights of the last ten days, a Muslim prays heavily, and asks forgiveness from Allah Almighty with the truest intention and be among the Blessed ones.