Every religion is based on some fundamental principles that one has to firmly trust in so as to be called its rightful follower like believing in the God/gods, following the specific Prophet/Prophets and accepting their Heavenly Books as true. The Islamic Faith includes considering Allah SWT as the Only God, following the Sunnah (Way of Life) of Hazrat Muhammad ﷺ as His Last Messenger and the Holy Quran as a means of true guidance.

“And who believe in what has been revealed to you, [O Muhammad], and what was revealed before you, and of the Hereafter they are certain [in faith].” [Quran, 2: 4]

The above mentioned Ayah stresses on fulfillment of conviction of a true disciple of Islam in terms of absolute commitment to whatever the Almighty Lord has commanded the past Prophets, His Apostle Hazrat Muhammad ﷺ and in the eternal life of after this one. The lack of recognition of the hereafter in one`s actions leads to deterioration of its Islamic Devotion through more and more pursuit of accomplishment of wishes of this life.

“Indeed! We have made that which is on the earth adornment for it that We may test them [as to] which of them is best in deed.” [Quran, 18: 7]

Thus, it is clear that the life in this world is nothing but a great examination of one`s reliance on Islamic Guidelines as human being is constantly persuaded towards the beautification of many distractions and longings on earth. 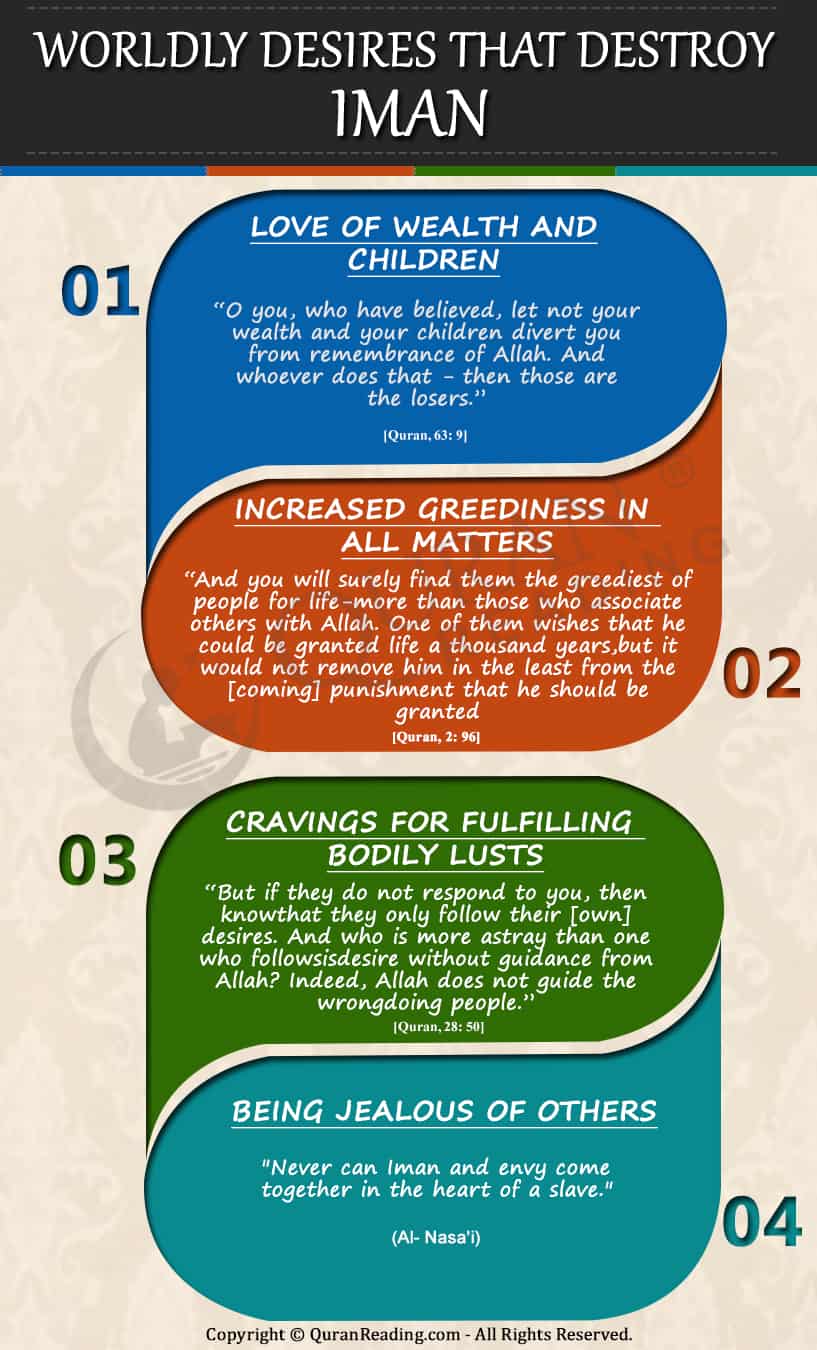 Some of the foremost worldly desires that weaken or even destroy a Muslim`s Iman (Faith) are described as follows:

Love of Wealth and Children

The entire system of living in the world centers on making enough income in order to live a successful life. Without wealth, no man can survive any longer on this planet. But keeping a balance between accumulation of material goods and completion of religious and social duties is very important. The common wish after wealth comes to be having sons and daughters, but they can also lead to forgetfulness of Allah SWT and avoiding many other responsibilities. As the Almighty Lord says in the Holy Quran:

“Beautified for people is the love of that which they desire – of women and sons, heaped-up sums of gold and silver, fine branded horses, and cattle and tilled land. That is the enjoyment of worldly life, but Allah has with Him the best return.” [Quran, 3: 14]

In the previously stated Quranic verse, Allah SWT has regarded fading of one`s religious belief as it is lost in the apparent charm of many of the cravings and inclinations in this world such as women, children, wealth, and other possessions like domestic animals and property. These are all merely the delight of existence on earth, which itself is temporary; therefore, it means that none of its pleasures could last forever. That is why the Gracious God says in the end that indeed the most excellent gains for an individual rest with Him which everyone needs to pursue, i.e. Jannah (Paradise).

“O you, who have believed, let not your wealth and your children divert you from remembrance of Allah. And whoever does that – then those are the losers.” [Quran, 63: 9]

It shows that possessions and kids are simply forms of diversions, because they are the dearest things to a person in this world, so it could well result in forgetting Allah SWT, which is indeed the destruction of one`s Islamic faith. Therefore, one should not take wealth and children for granted in this life; rather it should remember its true purpose of existence, i.e. to please the Almighty Lord in order to be successful in the hereafter.

Increased Greediness in all Matters

It is in the human nature that almost every individual tries to get the most out of things. A person is never able to fully satisfy itself with what it has; rather it constantly keeps on looking for more and more. Fulfillment of a need results in wanting extra and wants ultimately lead towards realizing delights of life. Allah SWT refers to the covetousness of inhabitants of earth for worldly life in the following Ayah:

“And you will surely find them the greediest of people for life – [even] more than those who associate others with Allah. One of them wishes that he could be granted life a thousand years, but it would not remove him in the least from the [coming] punishment that he should be granted life. And Allah is Seeing of what they do.” [Quran, 2: 96]

The Almighty Lord, by conversing with His Messenger ﷺ in the above mentioned Quranic Verse, indicates towards the voracious temperament of the people in this world especially Jews who even believed in the hereafter and One God, yet they thought of living in this world for thousands of years. Therefore, being a true believer of Islam, a Muslim should avoid from having greediness in all matters as it will eventually cause the weakening of faith and retribution in the hereafter.

There come moments in one`s life when a person comes under satanic influence and commits actions of sins. Such acts of crime which are done in order to complete one`s physical desires eventually lead towards annihilation of a Muslim`s iman. The Seer and Hearer of all says in Furqan e Hameed:

“But if they do not respond to you – then know that they only follow their [own] desires. And who is more astray than one who follows his desire without guidance from Allah? Indeed, Allah does not guide the wrongdoing people.” [Quran, 28: 50]

It means that going after the path of one`s own wishes of worldly pleasures actually causes a person to go astray from finding Allah`s Assistance, which is due to deterioration of one`s religious and moral convictions.

Being Jealous of others

It is commonly observed that an individual, instead of focusing on its own self, goes on to having spitefulness for better things and qualities that others possess. Rasulullah ﷺ has regarded the feeling of resentment in such matters as a source of obliteration of one`s faith.

“Never can Iman and envy come together in the heart of a slave.” (Al- Nasa’i)

It means that one who feels jealous of others can never have the rightful level of Iman near Allah and His Messenger ﷺ.

In short, Iman (Faith) is the most important attribute of any Muslim. Therefore, every true believer in the Religion of Peace should try its best to avoid the worldly desires described above and many other which distract one from fulfillment of the true meaning of Islamic Belief.