Hazrat Aisha Siddiqa (RA) is known as the mother of the believers. She (RA) was born in Makkah in the year 614 CE. Hazrat Aisha (RA) is the daughter of the beloved companion of Hazrat Muhammad (SAW), Hazrat Abu Bakr Siddique (RA). She (RA) was the third and youngest wife of Prophet Muhammad (SAW). Her father Hazrat Abu Bakr Siddique (RA) was the closest companion and most important supporter of Prophet (PBUH).

Amongst the wives of Prophet Muhammad (SAW), Hazrat Aisha Siddiqa (RA) was the youngest. She (RA) was married to Muhammad (SAW) at the age of six. Before the marriage with Hazrat Aisha (RA) Prophet Muhammad (SAW) saw a dream about her in which an angel had presented something to Him (PBUH) wrapped in silk. Holy Prophet (SAW) had enquired from the Angel what it was and he had said it was his wife.  When he removed the silk cover He (SAW) saw that it was Aisha (RA). Prophet (PBUH) used to receive revelation when He (SAW) was with Aisha (RA). Prophet (SAW) spent the last few days of His blessed life in Aisha’s (RA) apartment and died in her lap. He (PBUH) was buried in her apartment, which is still the only remaining room among the Prophet’s (SAW) household. 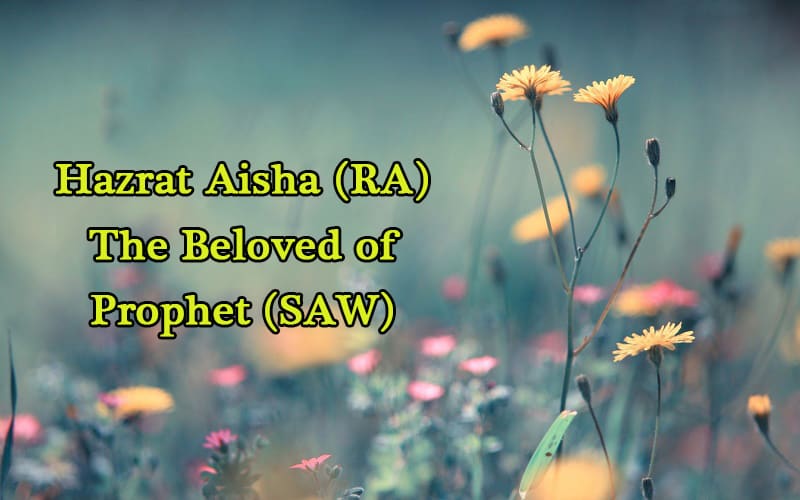 When she grew older she became the scholar, stateswoman and the major resource to all Muslims even today because she knew all of the Hadiths of Prophet Muhammad (SAW). Aisha (RA) was blessed with an astonishing memory and never forgot something once she heard it. Hazrat Aisha (RA) was the mean of spreading knowledge of Quran and also the practices of Prophet Muhammad (SAW). She (RA) learned from Holy Prophet (PBUH) and used to practice it. Aisha (RA) was very fond of playing with dolls and with her playmates when she was a child.

Hazrat Aisha (RA) was courageous and brave. She would go to battlefields just like in battle of Uhud carrying water in leather bags on her back to demolish the thirst of the fighting and injured Muslim soldiers.  In the battle of trenches, when the Makkans had blockade Medina and an attack from the Jews was feared she would go around inspecting the plan of defense by the Muslims.  She had sought permission of the Prophet (SAW) to participate actively in the battles but was refused.  She was delicate and the fear of Allah Almighty never left her heart.  She used to keep herself busy in prayers. There are several occasions on which Ayahs of the Quran being revealed because of Aisha (RA). One of them was when she (RA) was maliciously accused of adultery by the hypocrites. Allah revealed verses 11- 21 of Surah an Nur on her defense.

She was a lively woman who stood for truth and justice. She was a fountain of knowledge to all who met her and remains so to those of us learning today about the religion Islam. Aisha (RA) is a role model for women today and an excellent example to those who wish to use their vibrant personalities to better the ummah. She died on 17th Ramadan in the year 58 AH at the age of 66 in Madina. She was buried in Jannatul Baqi.