Quran is the Divine source of guidance sent for the benefit of mankind. It carries instructions about each and every aspect of life and by reading it one can find the right way to follow in every walk of life. Besides other things, the one thing that a person definitely understands by learning Quran Kareem is the emphasis that Islam puts on Salat or prayer.

Salat is one of the most emphasized upon elements in Quran and Allah Almighty has time and again stressed upon Muslims to offer their prayer regularly. Moreover, there are abundant hadith of Prophet Muhammad (PBUH) that show and signify the importance of prayer.  Therefore, as soon as a Muslim child becomes sensible parents teach them how to offer Salat, either by their own demonstration or using applications like Step-by-Step Salat app for Salat learning.

In Islam, prayer is the second pillar of the religion and one of the major obligations upon a Muslim. A Muslim has to offer five prayers everyday on the prescribed times. The first is Fajr prayer, then Zuhr, then Asr, then Maghrib and finally Isha prayer. 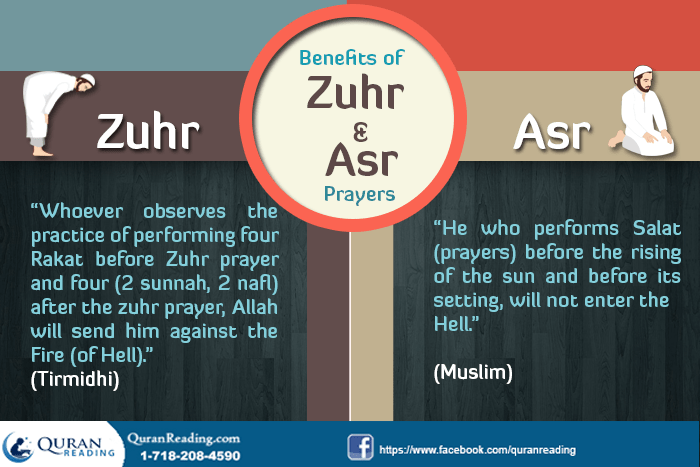 Although all the prayers are of equal importance, however, the following lines will discuss the importance and significance of offering Zuhr and Asr prayer in the light of hadith of Prophet (PBUH) and the ayahs of Quran wherever available.

As far as the reward is concerned. The Fard prayer of Zuhr carry the same reward as every other Fard prayer and their reward is with Allah Almighty. However, as far as the Sunnah of Zuhr are concerned, Prophet Muhammad (PBUH) said in a hadith:

“Whoever observes the practice of performing four Rakat before Zuhr prayer and four (2 sunnah, 2 nafl) after the zuhr prayer, Allah will send him against the Fire (of Hell).” (Tirmidhi)

This hadith makes it all the more important to offer the Sunnah prayer before and after the Zuhr prayer so that a person can get protection from the Hell fire. Offering Fard prayer is an obligation and if one does not do it, he or she be held questionable for it, however, when a person offers these Sunnah prayers, he or she gets the added advantage of being protected from the fire of Hell by Allah Almighty.

“This is an hour at which the gates of heaven are opened, and I like that my good deeds should rise to heaven at that time.” (Tirmidhi)

From the hadith it is clear that Zuhr is a time when the account of a person is taken to heavens, therefore, it is more than imperative that that the account for the day be closed with good deed. What good deed can be better than offering the obligatory prayer along with the additional Sunnah prayer.

In addition to being a time when the accounts of a person are closed and the doors of heaven are opened, the time of Zuhr also stands as a time when we are in the mid of our daily hectic routine. Therefore, stopping in the routine taking a break and remembering Allah Almighty definitely revives the spirit and gives a person more energy and vigor to go through the rest of day in a healthy manner. Ergo, offering Zuhr prayer besides being an obligation is also a means of reviving and replenishing the spirit for the rest of the day.

Asr is the third of obligatory prayer and is offered at the time of afternoon. The prayer comprises of 4Sunnah that are to be offered before the 4 Fard prayer. There are numerous hadiths available that tell of the importance of Asr time and prayer. The lines below discuss those hadiths.

In one of the hadiths, Prophet Muhammad (PBUH) said:

“He who observes Al-Bardan (i.e. Fajr and Asr prayers) will enter Jannah.” (Bukhari)

“He who performs Salat (prayers) before the rising of the sun and before its setting, will not enter the Hell.” (Muslim)

At another place, Prophet (PBUH) said:

“He who misses the Asr Salat (deliberately), his deeds will be rendered nul and void.” (Bukhari)

From the hadith the graveness of missing Asr prayer deliberately is imperative. It means that if one does not offer the Asr prayer, then his or her good deeds for the day stand nul and void. Therefore, one must make sure not to miss Asr prayer.

Note – Besides the importance of these particular Prayers, you can read about general importance of Islamic Prayers with reference to Quranic Verses.

In a nutshell, Zuhr and Asr are as imperative as the rest of the prayers and they carry great significance and reward. Every Muslim must make sure that in addition to offering the Fard Rakats of both the prayers, one also offers the Sunnah as well.