Although the life of Prophet Muhammad (PBUH) contains miracles the like of which the world had and has never seen, however, simplicity is still the dominant factor in the life of Prophet (PBUH). Whatever He did had the stamp of simplicity on it and every act of His life was although simple but special to the maximum extent. The lines below discuss some of the simple yet special attributes of the personality of Prophet Muhammad (PBUH). 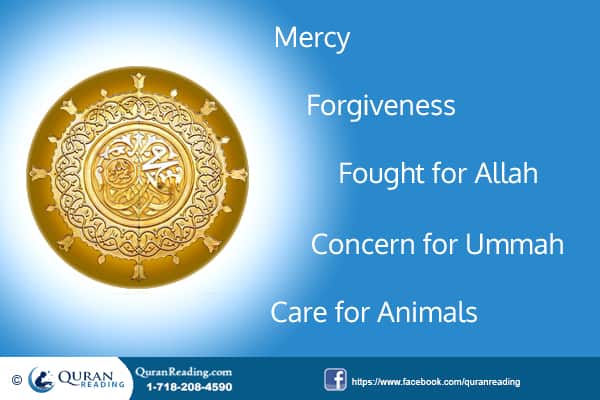 Perhaps the greatest and yet the most simplest of the personality attributes of Prophet (PBUH) is His mercy to the mankind. During His preaching He was abused, injured, threatened and harassed in all the ways, however, despite all this He remained merciful to all of them, forgave them and prayed for them. In one of His hadith, Prophet (PBUH) said:

“I have not been sent to curse people but as a mercy to all mankind.” (Muslim)

If there is one single attribute that can be associated with Prophet (PBUH) and that can be found dominant in His personality throughout His life, it is Mercy.

As mentioned above, Prophet Muhammad (PBUH) faced all kinds and sorts of troubles and difficulties during the preaching process. However, when Allah gave Him dominance over all those who rebuked Him, instead of taking revenge from them He opted for forgiveness. He forgave all those who caused trouble for Him, who made life difficult for Him, and who planned on Killing Him. This forgiveness although seems a simple thing to do but if a person analyzes the circumstances He had to go through and the kind of power for revenge He had over the people but still He forgave them it makes it special.

“He never struck anybody with his hand, neither a servant nor a women, but he did fight (jihad) in the cause of Allah. He never avenged any wrong done to him personally, but he did avenge a wrong violating divine commandments.” (Muslim)

From this narration it is clear that if there is any fight that Prophet Muhammad (PBUH) did or any action of avenge of aggression that is to be found in His personality is all for Allah. He avenged and fought those who went against the commandments of Allah and it had nothing to do with His personal like or dislike no matter if the people offended or disrespected Him. Therefore, this simple action of selflessness is quite special to His personality only.

Prophet (PBUH) said in a hadith:

“I stand up for Prayer intending to prolong it. In the meantime I hear the wailing of a baby and I have to shorten my prayer, being apprehensive lest my recitation of a long verse may tell upon the baby’s mother.” (Bukhari)

Muhammad (PBUH) is the beloved of Allah and one of the major reasons why He prayed excessively was to pray to Allah for the Ummah, however, that prayer used to get short whenever He heard the crying of a baby. The thing to notice is that the crying of a baby seems a trivial and simple thing, however, Prophet (PBUH) would shorten His prayer for the cry which shows how much He cared even for the babies of His ummah, thus making this simple act special.

Humans and the people of Ummah aside, Prophet Muhammad (PBUH) was caring to the same extent to the animals as well. There are numerous hadiths and narrations telling about how kind He was towards the animals, one of such narrations is when Prophet (PBUH) said:

“One of the rights is that she camels should be milked at places of water.” (Bukhari)

One can assess from this hadith that if a Prophet is so caring about animals then how caring and loving He should be for the people of His Ummah. It is the love for all the living beings of Prophet Muhammad (PBUH) that at an overt level is simple, however, if analyzed in depth and with understanding it becomes covertly special. Therefore, His love for animals is also one of His simple yet special personality attributes.

In a nutshell, a Muslim cannot begin to encompass the diverse and immense great character attributes that Prophet Muhammad (PBUH). In every aspect of His life He was unique. Everything He did apparently seemed simple, however, the effects of it were grave and far-reaching thus making every act of His special and magnificent.